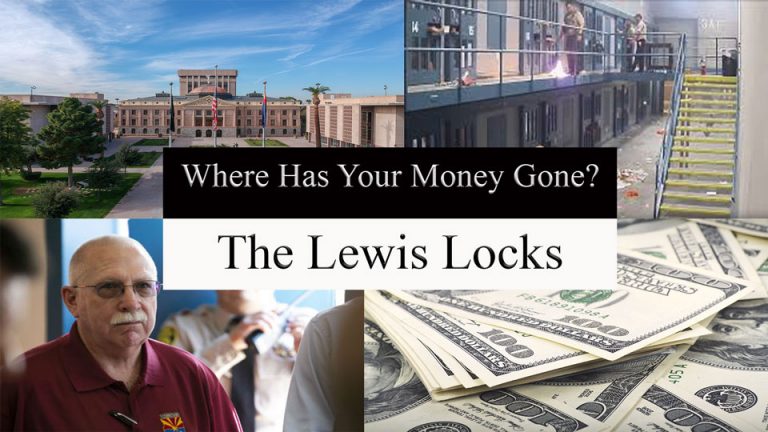 Where Has All Your Money Gone?

Millions of tax-payer dollars have been allocated on the locks at the Lewis prison near Buckeye, Arizona. Where has all that money gone?

The locks at Lewis Prison, located near Buckeye, AZ have become an issue that is perennially the bridesmaid and never the bride. Between 2005 and 2020 the Arizona Department of Corrections, Rehabilitation and Reentry (ADCRR) has recognized and repeatedly requested monies to repair locks in Lewis prison. Recognized as problematic as early as 2003, Lewis prison uses a sliding door that has a locking mechanism that can be ‘capped’ using a variety of materials and this capping allows the incarcerated to later open the door and exit their cells.

After a series of security incidents and the death of an incarcerated man at the Lewis Complex, the local Phoenix ABC affiliate aired a story by investigative reporter Dave Biscobing showing video obtained by an ADCRR whistle blower of inmates opening cell doors, assaulting an officer, setting fires, and multiple other security incidents. Based on this story, Governor Doug Ducey ordered an investigation and official report on the state of the Lewis lock situation. Governor Ducey appointed former Arizona Supreme Court Chief Justices Rebecca White Berch and Ruth V. McGregor to conduct the investigation and submit the report.

According to the report the retired chief justices submitted entitled Report to the Governor: The Effectiveness of Locks at Lewis Prison, dated August 12, 2019, it was determined that ADCRR had submitted budget requests that totaled between $28.8M and $65.2M to repair the locking systems across the Lewis prison. The requests identified the need from 1,284 locks (in 2018) to 1,857 locks (in 2020).

Even though the ADCRR had indicated the serious nature of the lock problem in the budget appropriation requests, in 13 of the 16 years ADCRR requested lock replacement funding – the legislature did not appropriate any monies for lock replacements or repairs. In years where monies were allocated, the legislature appropriated $5.2M of an $8.5M request and subsequently removed (expropriated) those same funds.

Finally, in June of 2019, and after the news reports had aired, the special legislative Joint Committee on Capital Review (JCCR) approved $16.5M for the repair of locks in three units of the Lewis prison. Former Director Charles Ryan claimed at a JCCR hearing that he had not made the request for lock repair and replacement an urgent item or sought emergency funding in his annual budget requests because he was not aware that the broken lock situation was as bad as it was.

In the Report to the Governor: The Effectiveness of Locks at Lewis Prison, retired Chief Justices Berch and McGregor detailed a broken reporting system in the hierarchy of the ADCRR. However, it appears that system was set in place in part to provide protection to high-level administration officials and create plausible deniability. Irrespective of the cause of the broken reporting system, former ADCRR Director Ryan’s claim that he was unaware of the serious nature of the Lewis lock issue strains credulity as he had personally signed all budget requests since his appointment as ADCRR Director in 2010.

Subsequent to the June 2019 $16.5M appropriation, it appears nothing happened to fix the locks. In September of 2019, ADCRR Director Chuck Ryan requested an additional $9.7M in the 2020 budget with a projected appropriation request of $31.7M for the FY2021 budget under the line item ISSUE: LEWIS & YUMA LOCKS, FIRE, AND HVAC PHASE 2 & 3. Soon after this budget was submitted, Director Ryan was replaced with Director David Shinn.

In April of 2020, new ADCRR Director David Shinn came forward with a revised request for a different type of door. He stated that the new direction was to replace the sliding doors with doors that swing. This came after the ADCRR had already spent $9M on the sliding model. Director Shinn claimed that a portion of the sliding doors can be used in non-inmate settings.

This change of direction and lack of substantive progress in fixing the Lewis locks led to an unusual bi-partisan agreement from the legislature. Both parties have asked for more clear and concise information from Director Shinn when the project was set to be reviewed. That review is now overdue. It remains unclear what Director Shinn plans to do to fix the problem and to justify the monies allocated and spent on this long overdue and incomplete project.

ATAC will continue to follow this situation and report on developments.

ATAC (Arizonans for Transparency and Accountability in Corrections) believes that without independent oversight, the ADCRR will continue to ignore their responsibility to the safety of those who are in their care in the prisons in Arizona, ADCRR staff, and to the taxpayers who are funding these continuously failed efforts to fix the doors and locks. Arizonans deserve better – urge your legislators to support the establishment of an independent, citizens Oversight Committee and Corrections Ombuds so that we can hold ADCRR accountable for their $1.3B in appropriated tax funds, the 40,000 humans who live in their care, and the 10,000 men and women who work in the state prison system.