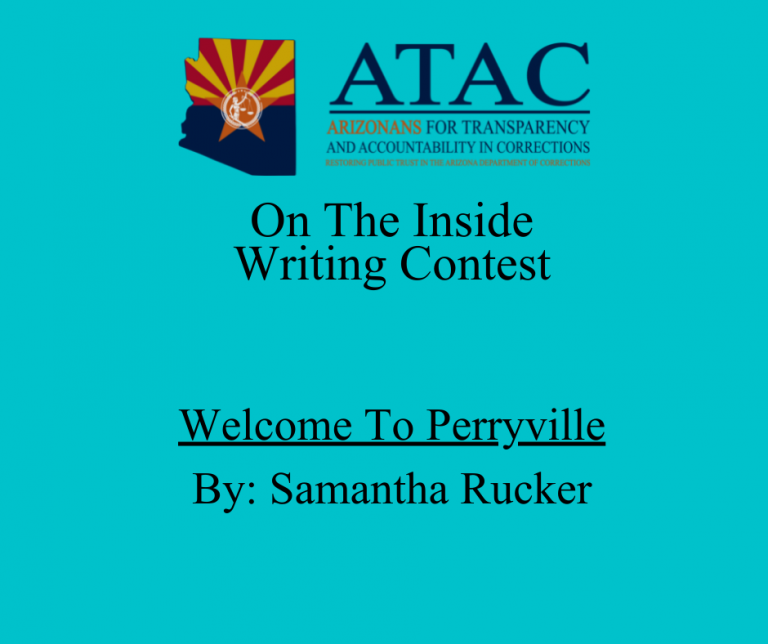 "There are some things that movies and T. V. don't show you about prison or don't want to tell you because they don't know or it's too much."

“Close gate two please” are the first words I here as I enter Perryville now known as ADCRR. I am then led to a room with 20 other women, we are stripped naked told to spread and cough then given an orange jumpsuit with ADC lettering all over it. We proceeded in a line, as if a chain going through a long narrow hallway entering a brown building dull in life to what is called intake. Here we receive a assessments for women’s health, mental health, dental and eye exams to whom each question asked of the nurse responsds, “I don’t know, wait till you hit a yard”, I wonder what do they know and think this is not your friendly neighborhood doctor.

Once intake is done I’m thinking finally a day that started at 7 a.m. is over, but there’s more. Our next move is R&A where I spend 31 days wearing the same jumper from intake, where I was given one extra change of pants, bras, and socks having to wash them out by hand every other day. We are given one roommate (sometimes) and every other day and hour of outside, fresh air. I begin to think me and my bunkie are the only ones experiencing this harshness, only to have our 1 hour out together shared by other women who have received the same treatment or worst. Then at 1 a.m. I’m awaken to “pack your things (which is easy, only having the bare minimum) you were going to a unit”, only to depart 7 hours later. Welcome to San Carlos where 1200 women live in a dorm setting, big to low-level custody, inmates with different walks of life. We have to learn to share 1 microwave between 250 to 300 women per building, 10 showers and toilets, where we are repeatedly told to wait. I soon learn what I had seen on television about prison was a fabrication to make it more interesting. The public has no idea of the everyday challenges of realities here goes…

I didn’t know what to expect being my prison sentence, in movies little was shared about female prisons so all I had was the old black-and-white movies, where men work sun-up to sundown digging holes or the meals of water, beans and bread. Then there were the 90’s shows that made you believe you had to choose Bloods or Crips, blacks or whites and every day you feared getting shanked (stabbed), beat-up, raped or all of the above. Now there’s Orange is the New Black and the only part I watched depicted inmates being unsupervised working or getting “their groove on.”. I soon learned most of what people see about prison doesn’t come from someone who’s been there or a fantasy.

My first job wasn’t digging holes but a job just as tedious for those for us who come into prison, a place where everyone starts and works the kitchen on the yard, or having to wake up at 2 a.m. to work complex kitchen (main kitchen for all prisons, male and female and make the females make all meals for males and females) where you work 8 hours only making $0.10 an hour until mandatory literacy is met. When working 40 hours a week for 2 weeks and individual can bring home $8 total if no fees owed, not enough to live on, to take care of necessities or anything else. The only way to make more money is passing mandatory, which is equal to a high school education, where there can be some exemptions. Not everyone needs these exemptions unless you have a history of learning disabilities, medical reasons or have over 700 hours in class with no advancement, so what about those that have graduated, have a degree before being incarcerated or those older inmates who haven’t been in school 30 plus years and are stuck because of mandatory? Education is beautiful and appreciated but if I’m highly qualified for a job that I have been doing for years and I need this job to survive, how can that be denied because of a test that the only reason is available is because the state is paying for it? Meaning ADCRR places people in classes not because of the person’s desire to get ahead but for their own purposes because when ADCRR have people who want to test, advance they are told no because they aren’t a priority, wouldn’t it make more sense and be more effective in its re-entry to allow those with a desire to advance educationally that opportunity, instead of forcing a person who states they have no need (already have a degree) or those who aren’t ready to sit in a class there paying no attention to? Also you have to ask how would I survive on $8 if I wasn’t a priority to qualify for a better job? Most inmates have to call home, continuing to hound family for support, and there are only those and there are those that have no one and their left to make hard decisions, I have hygiene but I also drink coffee maybe I smoke I would like to buy something to eat on the weekends but I’m limited. I’ve been trying to get into mandatory but they say I’m not a priority, who’s going to help me. My question is what or how does ADCRR determine who’s priority if they won’t take volunteers who truly want education?

After all that work all you want is a shower and a hot meal and it was nice knowing you’re fed 3 times a week but nobody tells you what you’re not fed and how weekends you have to feed yourself. The meals here aren’t that bad, baked chicken, potatoes, pudding sometimes cake, pancakes for breakfast, oatmeal and a type of bologna sandwiches for lunch, but where are the fruits, vegetables and I’m not talking about spoiled strawberries they feed us, or the overly cook broccoli stems with every meal. Where are the nutritional calories they say were served daily. When comparing the women’s and men’s prisons there’s a big difference. First the public is told were all treated equal, men and women alike yes that’s true in the men mess up making hooch we women lose our privileges test its true women where the same clothing, and yes we both work hard, laboring jobs, but why do the men get double portions? Or why do the men work outside crews with tractors, heavy machinery, and we women do too, but while they’re eating steak and egg breakfast burritos, us females are doing the same work only to be given 2 pancakes and a sausage patty? I understand men and women have different calorie intakes, but how can you honestly say female or male on the weekends receive those full calories? The taxpayers pay for us to be fed, yet weekends you eat at 7am and then again at 6pm, so in between that time you’re forced to sneak food out the kitchen, risking receiving a ticket just so you can have something for lunch. Why isn’t our calorie intake just as important on the weekends as week days, because some of us still work weekends. Working in the kitchen I’ve leant we throw away so much food (sandwiches) that could be used to feed us on weekends, what would you do risk a ticket by taking food out because you know you’ll be hungry or just starve2?

There are some things that movies and T. V. don’t show you about prison or don’t want to tell you because they don’t know or it’s too much. Like working for a ACI (Morrison, Televerde, Hickman’s) these jobs give someone an opportunity to make $4 to $5 an hour, allowing you to take care of yourself and put money away for when you get released, I’ve had the pleasure. So this is how it works,  $0.50 cents of every dollar goes on your spendable, 20% for fees, another 30% on your savings account (retention) and 30% room and board. Room & Board? Doesn’t taxpayers pay for every inmates stay, clothing, and food? So what need is there to tax inmates who have passed mandatory, have been ticket free, and are working the long hours to have a chance upon release? What is that extra 30% being used for, who does it go to? It is a privilege to work outside these Gates, knowing you’ll have some foundation and not just $250 a gate fee, but that privilege shouldn’t come with ADCRR having their hand out. So as a taxpayer don’t you want to know why you’re paying for my stay, when I am made to pay rent as well? Don’t you want to know where your money is going because I’d like to know where’s mine? ADCRR isn’t just about working there so many other positive movements, sports furthering education (Rio Salado), confronting addictive behaviors, and many self-help programs, but isn’t this called rehabilitation and re-entry? So why can’t we see more rehabilitation programs? The programs we run are great, but we can’t rehabilitate ourselves, we need volunteers, trained professionals to oversee us, those are accredited to teach, to guide, to help. Did you know in 2018 Perryville women’s prison became the second women’s prison in the country to host a TED talk called TEDx and I had the pleasure of being one of the speakers. How amazing it was to see and know ADCRR are was allowing us to participate in this to rehabilitate, change and allow us inmates the chance to grow, change and be seen in a different light. Rehabilitation starts from within and believing in us and more programs like TEDx will continue to do just that.

You know the public is only allowed to see what people want them to see about prisons or believe we are all murderers because it’s easier to pass the buck then rehabilitate, it’s easier to label them then heal, and it’s easier to forget then to make change, but unless you’ve been here or have loved ones here you’ll never know the truth. It’s sometimes we don’t have good food, good officers, or get out of quick clothing, sometimes we get into argument or fight, we’re 1200 females, we are human. People confuse any way they choose, but until someone speaks on both triumphant and defeats how will change ever occur? For all of you who think we are murderers or we deserve it, maybe you need to ask, what would you do if your husband abused you and your kids, your family needed to eat, or your spouse was homeless, addicted to meth with nowhere to turn? Once the public named 279177, I was already nothing. Yet this time I have the chance to tell the truth not lies. My number didn’t make me Public Enemy Number One, it’s the public not knowing the truth behind 279177; my name is Samantha Rucker, I am a three-time felon, however ADCRR has begun to allow me rehabilitation, finding who I am and giving me hope in inmates as well. The only public perspective that matters now is how I Samantha Rucker believe prison to be today and who I am…

Prison saves lives, opens doors, changes people and gives second chances. You can continue to believe movies or choose not to hear the truth or beginning to change your perspective, fixing what needs help and expanding what’s not broken. I know many, many men and women who come from this gutter called “prison”,  now own businesses, bosses, hold CEO titles, changing lives. None of us want to be here, get some of us deserve to. Your perspective is what you truly want to see and believe, so yes the public was right eye, 279177 needed to be here, because without this rehabilitation I’d still be lost.