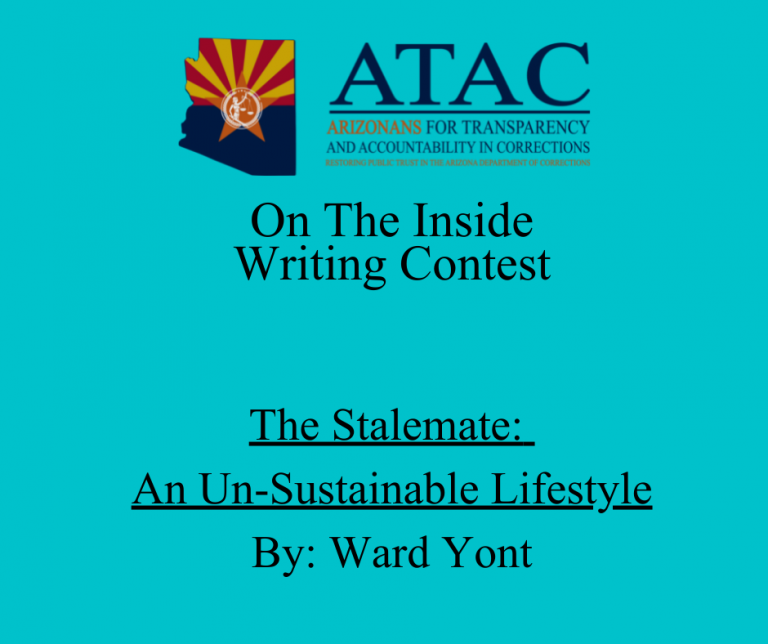 "Many are quick to make a connection between the cunning efforts of an often untouchable system and its big corporate contractors to exploit and monopolize the prison market."

One would think there should be little mystery anymore surrounding the notorious affairs of the prison culture. Even from the outside looking in, we all know it’s a highly dysfunctional setting that houses some of the most dreaded and infamous of society. It plays host to a variety of inclement behavior, from fights, stabbings, and killings, to drug abuse and sexual deviance. However, after we’ve all turned our TVs off and gone to bed for the night, there are many other subtle concerns that face the incarcerated other than getting shivved or sodomized.

For better or worse, ADOCRR is supposed to be little more than an extension of public policy. Its imperative, much like the law itself, is to protect and correct. Inasmuch, safety and security are its two foremost objectives. The criminal mind, on the other hand, is not always so virtuous. Its imperative is to exploit all situations to suit it’s self-serving needs, hence the emergence of the Convict Code, an “honor amongst thieves” credo in the amoral domain of the secular underworld. In the deeper layers of the psyche, this is nothing more (or less) than a type of tyrannous codependency. These are the foremost dynamics operating within — even controlling — the prison social network.

Traditionally, the polarities that exist between the two sides of this corrective fence remain not only intact, but heavily reinforced — both as measures to protect the underlying edict. However, at some point in recent history, it seems that the two roles have been reversed, entirely.

Typically, those [prisoners] who seek personal transformation and inner-growth do so quietly and solemnly. But with staff’s narrowly trained focus upon the ill-mannered among us, they, often, even if only through the course of attrition, grow blind or indifferent towards the amicability of NON-troublemakers. And although this is certainly an understandable consequence within the framework of cause and effect, it’s a neglectful and often oppressive impediment to the decree of correction.
These are the germinating seeds of Mass Punishment.

[1] “Learning through rewards is more effective than learning through pain, because pain is an ego illusion, and can never induce more than a temporary effect.” (A Course in Miracles, p. 68:3:4)
Simply NOT qualifying as a threat is hardly incentive-based, motivating, or rewarding. What it does create is a situation where one can only go down in standing. Sadly, things like discretion and discernment tend to blur some of the definitive lines of policy. This cost-only dynamic tends to affect and discourage those who pledge to do well. And this systemic breakdown doesn’t stop at the social level.

One of the most egregious travesties imposed upon the inmate population warranting external oversight is the disparity between weekly wages and the “cost of living” within the prison community.
A few examples of job opportunities offered on any given yard are a variety of unskilled positions, such as resident/housing/bathroom/shower porters, outside landscaping, food servers in the chow hall, etc. Skilled positions include: education clerks, electricians, maintenance,

barbers, etc. The pay scale ranges from an anemic 15¢ to a handsome 45¢/hr, respective to a three-phase institutional rating.

The word “handsome” was used facetiously to highlight the unfathomably wispy amount this [top pay] may seem to be for anyone in the free world saving up to buy, say, a car, a boat, or a new home. As regrettable an amount as this may be, the greater travesty is the fact that this pay structure has remained absolutely unchanged for decades on end, while the cost of living — i.e. basic hygiene and food staples at commissary — has not only doubled and tripled, but in many cases quadrupled and quintupled in the time span of the last twenty years alone. And one cannot suggest that this isn’t another compelling reason for prisoners to supplement their income through more illicit means. Because it is.

Of course, prisoners aren’t necessarily burdened with the overall expenses that those in the free world have. However, we have incurred a small range of additional costs in the past two decades: Electricity — $2.00/month, medical — $4.00/visit (which ain’t bad), a new “transition” and “ITA fee” (whatever those are) that amount to a couple bucks off our paycheck, and, of course, the even harder hitting “debts to society,” such as court fees, court-ordered restitution, child support, D.U.I. charges, and the like — a roughly 30% gouge that gets deducted off the top — not to mention our release/gate fee, that’s an accumulation of $250 that is [still] ours once we’re released.

Although this might not sound like much in gross totals, when weighed against an unvarying-for-30-plus-years $8.00-32.00 paycheck every two weeks, atop a quadrupling-and-still-steadily-rising-every-few-months commissary cost, this suddenly arises as a grievance worth mentioning in the grander scheme of prison survivability. This, of course, puts more obligation onto outside (tax paying) family members to support [the] standard of living for an incarcerated loved one.

Nor shall one be anything but remiss in failing to mention that inmate clothing — manufactured by inmates, no less — once issued at no expense, has now been given a regrettable price tag ranging from roughly $3.50 -16.00, for anything (that fits) from a pair of personal boxers to a pair of pants, respectively. T-Shirts: $7.51. Jackets: $30.00.

Many are quick to make a connection between the cunning efforts of an often untouchable system and its big corporate contractors to exploit and monopolize the prison market. In fact, as much as any sound mind would like to take solace in assuaging [un]likely fears of conspiratorial malfeasance and systemic corruption, it becomes nearly impossible to entirely dispel the notion that such a coercive turning-of-the-screws on the lives of the incarcerated and their families, alike, isn’t at least a conveniently ignored oversight taking refuge in the dogmatic imperative to “give back to [the] community.”

Furthermore, Arizona, like many other states, following a federally mandated Integrated Housing Policy (IHP), has been given funding to offer a litany of alluring but superficial incentives — movies, video games, extra phone calls, food visits, and perhaps the most accommodating of all, individual computer tablets through which to purchase additional e-mail, music, video games, news feeds, and movies — in exchange for ostensible compliance…or rather an unspoken compromise in the “old school” code.

The next question might be whether any of us really WANT this type of luxury and convenience in our lives, not only as a likely concession into the lunacy of the system’s celebrated, “Inmates of the 21st Century,” but even so much as to pay for it, ourselves? And the overwhelming sentiment is — just like any in the free world who demand convenience and instant gratification to the point of squandering exorbitant amounts of money for it — YES!! Besides the swimming pool and women, what more could one ask for…except an unlimited supply of cash to afford such an opulent lifestyle!?

For those whose refined palates are driven more by unquenchable desire, one can find further comfort in Russian writer, Dostoyevsky’s famous indictment against [in]humanity, [2] “The civility of a nation is judged by how it treats its prisoners….”

Meanwhile, the rest of us shall suppose he mustn’t have meant such things either in the face of such opportunistic capitalism or in the absence of swimming pools and women alone.

Included in the new prison experience package are opportunities to purchase “fundraiser” food from the very corporate entity (Trinity) that is contracted to provide food service to the inmate population three times a day, as prescribed by federal law. Perhaps not so curious is the quality of sustainable foods — real protein products [beef and chicken] — being substituted or removed entirely from the daily chow hall menus, but [now] being offered on the official fundraiser menus for roughly $12.00 a meal (including a soda and a bag of chips).

Naturally, for those who don’t have family to supplement their daily need for such added comforts, life in prison can be a bit deprived and anemic. It is even written [somewhere] that, “Man shall not survive on Turkey Bologna alone….” Nor is there anything manly about the portions at all.

On a typical morning tray, there may be as little as four (sometimes even three) items of food: a humorously anemic splotch of premixed scrambled eggs, the half-inch deep serving of farina, two slices of bread (which technically doesn’t even fit into any of the slots, but instead lay conveniently flat, atop the entrée so as to hide the meager portion[s], leaving yet another empty cavity in the tray), and, of course, the potatoes: prepackaged 1/8″ thick opaque coins, or greasy straw mesh shavings — undercooked and over-seasoned (or vice versa) on any given morning.

But even more technical was what the official chow hall menu stated, which, in addition to the four mentioned items would be the fallible observance of other documented accommodations, including a stingy dollop of water-whipped margarine, [a] dime-sized packet of salt and pepper, and a budget-friendly half pint of milk (only 5 days of the week), and “juice” — aspartame polluted water, that, were it not for the presence of on days without milk, we might not be served any liquid at all (even so much as water, as has happened on occasion) given that, technically, “water” was not listed on the official menu.
At one point the chow menu became the focus of such bureaucratic austerity that many feared soon not being allowed to breathe the chow hall air, as [it] too was not a prescribed item on the menu.

Such policy, by definition, becomes the common benchmark — the last line of defense — ostensibly for everybody’s sake. It also becomes the MOST that anyone can (and shall) do, in the pledge towards perfect equality. However, equality is quite different from fairness…or survivability.

Even issues affecting the collective disposition of the prison population, when brought to the attention of immediate staff in a diplomatic manner (such as in Town hall meetings), they’re often dismissed as being “out of our hands,” or “above [the] pay grade” of unit level staff.

Hence, the voice of the inmate population becomes silenced amid this bureaucratic impasse. A stalemate. A travesty of correction.