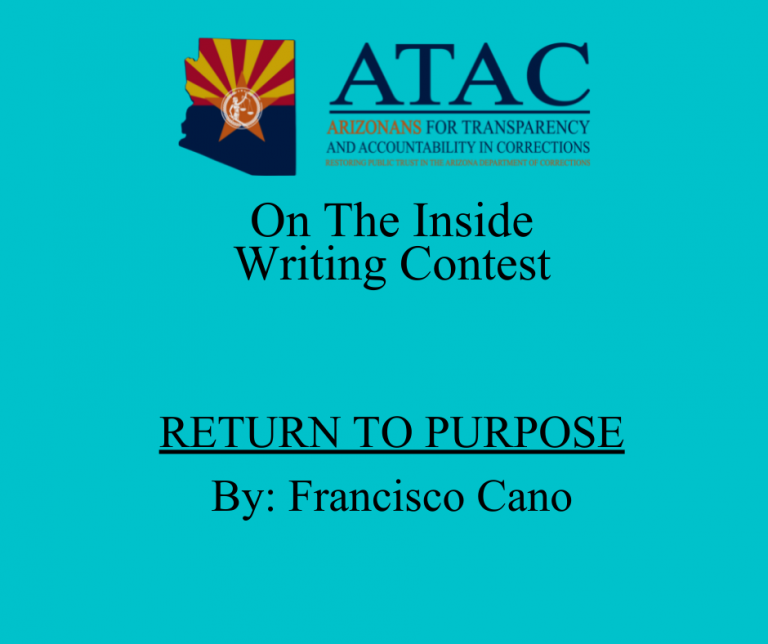 "There is a great opportunity that is currently present, that is the creation of an independent oversight committee."

The establishment of procedures, guidelines, processes, aspects of culture, or the general method of what simply is, have in common an origin that is based on opportunity. Opportunities over time are known to adjust or be created as needed, however no adjusted or created opportunity from what already exist, will measure up to the initial opportunity for the creation of what is to be. With any establishment comes a line which is formulated not to waver, mislead, or purposefully be misunderstood, so as to fulfill the obligations set forth by the creators.

It is of the upmost importance that any establishment begin with a clear understanding of all that lay beyond the point of creation.

There are numerous potentially beneficial changes and adjustments that could be made to accentuate the newly revised perception of the Arizona Department of Corrections Rehabilitation and Reentry. The addition of “Rehabilitation and Reentry” to the unfamiliar, may suggest that leaps and bounds are unfolding to better serve those incarcerated and the communities they are soon to return to. This suggested belief alone will be viewed from multiple perspectives. It can be said that any idea that has multiple viewpoints, has the advantage of also having the greatest potential for progress. This is true if the viewpoints come from outside of what has been established.

There are many cultures that have been created from, through, and for ADCRR. Among these cultures are, ADCRR in relation to the community that has no direct connection to ADCRR, other than personal perspective about what the criminal justice system means to them, ADCRR as an agency with staff that they themselves have established a belief system/brotherhood and solid foothold on how the day to day operations of any ADCRR facility will be ran, maintaining congruency throughout the state, also is the culture and subcultures of those that live the experience of incarceration. However an individual or group identifies with ADCRR, what is common amongst them, is that each group or individual brings forth an attempt to establish new lines in the sand. This moment of establishment as optimistic as it may seem, actually may do more damage to, and take the purpose further away from the original idea of the prison system. The crossing of lines has too many meanings for everyone involved, so amny in fact that it is better to force the line to waver so as not to get caught in a knot, this act in turn leaves integrity vulnerable. Discretion has been given too loosely to those in power, it is a double edged sword that reflects responsibility on one side and avoidance on the other. Unfortunately for progress it has only cut one way.

There is a great opportunity that is currently present, that is the creation of an independent oversight committee. Such a committee prior to establishment will have one opportunity, one purpose, and be allotted one line to be formulated so as to create a much needed new method of what simply is. ADCRR and all those included, connected, and dependent are blinded by emotion, thought and bias. The idea of living in the solution as a collective has been lost. Better than to debate, seek flaw, hesitate, or prolong is to simply make new. Creating an IEOC (Independent External Oversight Committee) for ADCRR allows for the return of purpose, integrity, fairness, and most importantly consistency to re-emerge. Accountability and transparency will be key to progress, as will the removal of discretion as an avoidance strategy. The public view of ADCRR will never satisfy the public as a whole, due to the various belief systems. It will be beneficial immediately and/or long-term for both ADCRR and the IEOC to recognize and utilize this notion as a starting point. From this starting point an IEOC can begin to identify and prioritize areas of concern in regards not to the public, staff, or the incarcerated population but rather concerns that are damaging to the foundation of what ADCRR in its original form was meant to be. Such areas include training of staff, criteria for employment, periodic evaluation of staff, employment of the incarcerated population, medical services, and transparency of funds to the public/committee to name a few. ADCRR however resistant to an IEOC can not deny that one is needed. The grip is lost and no amount of attempts such as new programs, integrated housing, or simply changing the name of the medical provider will repair it. ADCRR has exhausted all avenues of progress. This is not to say that potential is not present, but it is to say potential is not permanent or promoted.

In closing an IEOC is needed for no other reason than to better serve the community, families and loved ones of those incarcerate and to instill hope to those living the experience of incarceration at this point in time. An establishment of an IEOC will be the key factor in restoring progress and purpose throughout the ADCRR.