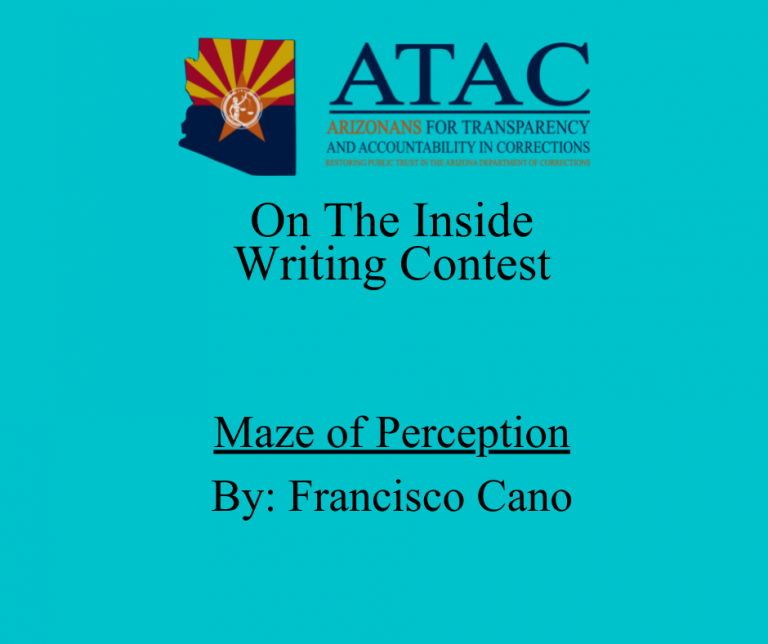 "This portrayal of violence, sexual assault, and racism is skewed in such a way that captures the attention of viewers, not to educate or scare straight but to commercialize prison to those that buy-in to this false reality"

The idea of individualism and uniqueness could be viewed as a character trait, that through hard work, dedication to self, and deep profound self-reflection can be obtained. However one chooses or finds this idea, will equally find that the circumstances that are experienced are individual and unique in their own right.

As the reality for those incarcerated will differ from individual to individual, as too will the public perception of prison for the population that may never experience incarceration. In turn, this allows for the public perception to remain under a ceiling of potential perceptions based on values, core beliefs, and in some cases conformity and predictability. Some public perceptions of prison may be but are not limited to, the idea that crime is crime and law is law. Finding that any person that commits a crime should be locked up and removed from society, so as to keep communities, families, businesses, and the general progress of common decency and humanity safe. The perception is also present that those that are incarcerated are evil, dangerous, and are of no value other than for the cause of destruction, chaos, and general hatred of life. Others may hold the perception of prison to be a form of correction and rehabilitation, at which a belief that everything is being done to save and heal those suffering from the disease of addiction and criminal behavior through programs, religion, and discipline all which are unseen by the public first hand. The portrayal of incarcerated individuals as seen on TV, film, and other media outlets plays a major role in the perception of what prison means to the public. This portrayal of violence, sexual assault, and racism is skewed in such a way that captures the attention of viewers, not to educate or scare straight but to commercialize prison to those that buy-in to this false reality. With this perception comes the argument that not only is this a form of stereotyping which hurts those that are genuinely seeking change, but is also potentially causing life altering discrimination against the prison population that limits opportunities for those with a lived experience in the criminal justice system. This perception has yet to be addressed in such a way that would create protections for those re-entering society. Also to be mentioned is the public perception of prison as nothing more than a secure, revolving, and financially driven method to increase revenue at the expense of the undesirable and disposable. This perception could be easily re-identified if only the public could see the line that is drawn between cost and care. The uniqueness of public perceptions agreeable or otherwise have found a manner in which all public perceptions of prison are to be respected. This will remain unchanged only due to the inability to identify the perception and its root of origin, be it a place of honesty, sincerity, or true individualism.

For those incarcerated the perception of prison is quickly replaced with an everchanging reality. This is not to say, that the individuals previous perception however instilled or promoted will not have an impact on which direction ones reality will come from. By this what is meant is there are choices that are immediate and choices that are only made after a variety of stages that occur during incarceration. The reality is as such, the prison system has ben divided into separate branches and the quicker this is identified by and individual the sooner the choice can be made that best suits the individual’s perceived reality. The branches include, how prison is viewed by the public. This could be seen as visual and/or written advertisement, visual in that those that work in administration will only see what is showed to them. When officials visit a facility it is known in advance. This allows time to only show what is needed to be seen, so as to gain approval. As for written advertisement, this can be viewed as shared reports/memos, directives, procedures, and protocols that are available, creating a belief that the operations of any facility are in desired and working order. The reality is this is not the case. Another branch is the unseen reality of how the prison and its staff actually run the day to day operations. There is a branch that includes the general population, that are responsible for the yard politics that are associated with crime and substance use. Another is the individual branch, that allows an individual to choose how time is to be spent. There are many subcultures among the culture of those in prison, some are positive others are not. The reality is, it is easier to allow the population to divide itself so as not to be overrun by an idea of true change.

In closing it must be noted that reality and perception will remain everchanging. Allowing the belief that grasping to one form of either could create a cure all solution is just as harmful as some of the implemented results of unfavorable perceptions. To take a direction of progress, both public and incarcerated populations must come to agree that the foundation on which to build, is not to be directed at one reality or perception. More so it is to be the support for ideas that allow the reality of prison for those incarcerated to not be forced upon, but rather chose. In doing so, upon reentry the incarcerated individual will bring forth a new perception of prison that is honest, in turn having a honest impact on the public perception.