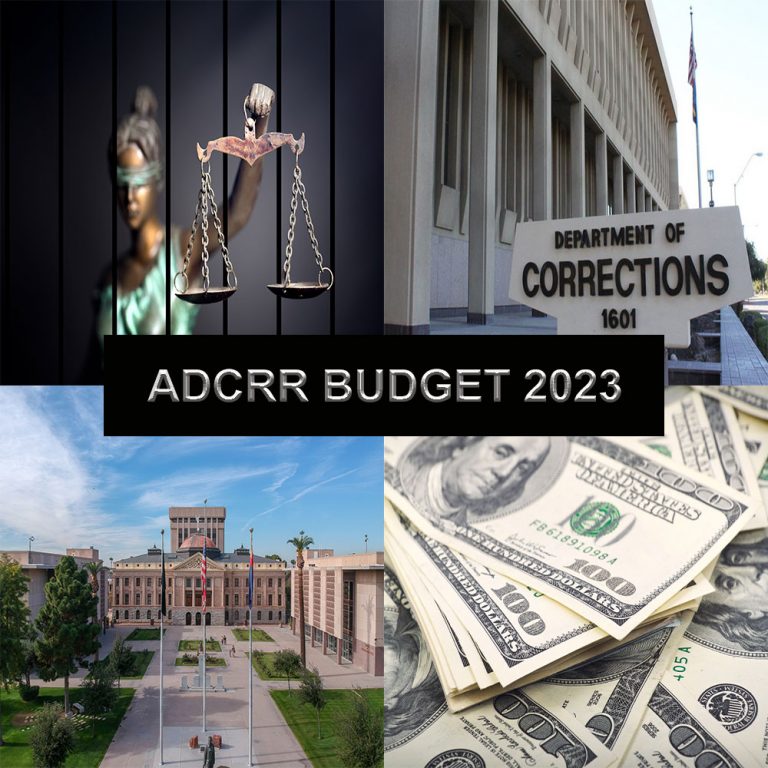 The Arizona Department of Corrections, Rehabilitation, & Reentry (ADCRR) has asked lawmakers to authorize a $1.5 billion dollar budget for FY 2023. They are requesting a 15% increase in budget over last year, despite an 8% decrease in the prison population in that same time period. In fact, the last time the Arizona prison population was this low was 2005. The budget for ADC that year was $704 million. So, despite having the same prison population as 2005, ADCRR is asking for more than twice as much money to manage them. This money comes from the Arizona taxpayers. It is your money. At this point, you may be asking yourselves the following questions: Where is this money going? What is going on within the ADCRR that they need twice as much money as they did in 2005 for the same number of prisoners? Unfortunately, these questions are hard to find answers to because there is no transparency or accountability for this bloated, systemically failing agency. Because of this lack of transparency, our two main sources for information about what is happening within the ADCRR and where your money is going are ADCRR themselves and the media. Let’s examine both of those now.

In reviewing documents put out by ADCRR, we can see that only $2 of every $100 goes to any sort of treatment, education, religious, or reentry program. ADCRR admits that 78% of its population needs substance abuse treatment yet only 2% actually receive it (Source: Arizona Department of Corrections Per Capita Report FY2020). This failure to provide any substantive programming, counseling or education to people inside has resulted in a recidivism rate of 50.3%, meaning that this agency is failing more than half the time (Source: Arizona Department of Corrections, Corrections at a Glance Report, March 2022). By ADCRR’s own admission, they are not providing adequate treatment and programming to the prisoners they house, and the majority of those prisoners will then return to prison after being released.

Next let’s turn to the media to see what has been going on within the ADCRR over the past year or so. Remember their budget last year was $1.3 billion. Was it money well spent? First, we will address public safety. In January of 2021, two inmates escaped from the prison in Florence and were at large in the community for 5 days before being captured. Investigations revealed a number of security problems within the facility that made the escape possible (https://www.abc15.com/news/region-central-southern-az/other/arizona-department-of-corrections-rehabilitation-and-reentry-boosting-prison-security-after-2-inmates-found-a-way-to-escape-in-january-2021).  Less than a year later, another prisoner almost escaped after making it through two fences undetected as staff counted him in his dorm the whole time (https://www.abc15.com/news/local-news/investigations/escape-attempt-in-understaffed-arizona-prison).

What about the safety of the people living and working in the prison? A review of media coverage revealed that ADCRR cannot seem to keep its staff or its prisoners safe. Staff are bringing in contraband (https://www.12news.com/article/news/crime/2-arizona-correctional-officers-arrested-for-promoting-contraband-authorities-say/75-72b66a40-1b00-4c2a-93e8-bc612d4416d9). Staff are being assaulted by prisoners (https://www.abc15.com/news/local-news/investigations/prison-doors/leaked-adcrr-prison-videos-show-brutal-assaults-security-failures). Prisoners are being attacked and killed (https://www.abc15.com/news/region-central-southern-az/florence/inmate-attacked-killed-in-florence-prison-department-officials-investigating). Prisoners are committing suicide (https://kyma.com/news/2021/06/02/inmate-found-dead-at-yuma-prison/).

Putting aside the safety of prisoners from violence within the prison, how is ADCRR handling prison healthcare and other conditions of confinement? Prisoners and staff are getting COVID, dying from COVID, and spreading COVID to the communities surrounding the prisons (https://www.abc15.com/news/coronavirus/covid-19-problems-within-arizona-prisons-spilling-into-communities). This past year also saw a new prison healthcare trial (Jenson v. Shinn) where we heard testimony describing horrifically inadequate medical and mental health care resulting in both premature deaths and permanent trauma (https://www.kold.com/2021/11/05/kold-investigates-prisons-trial-arizona-trial-over-prison-healthcare/). Prison healthcare is so bad that the United States Federal District Court is poised to issue a ruling that may put the healthcare, mental health care, and use of solitary confinement operations under federal receivership (https://www.pbs.org/newshour/nation/arizonas-privatized-prison-health-care-has-been-failing-for-years-a-new-court-case-could-change-that). Finally, some prison units are considered so unsafe by outside medical agencies, that ambulances refuse to enter the prison, resulting in more prisoner deaths (https://www.abc15.com/news/local-news/investigations/ambulance-crews-refuse-to-go-inside-short-staffed-arizona-prison). Outside of the lack of adequate health care, prisoners also face other inhumane conditions including a lack of running water (https://www.azcentral.com/story/news/local/arizona-breaking/2021/10/13/incarcerated-people-report-water-outage-eyman-state-prison-in-florence-arizona/8428037002/) and expired food being served to prisoners in filthy kitchens infested with rats and cockroaches (https://kjzz.org/content/1683207/blood-cockroaches-and-gigantic-rats-inspection-reports-reveal-filthy-conditions).

95% of prisoners will eventually be released from prison. It is in everyone’s best interest that they come home better than when they went in. Instead, ADCRR’s complete lack of regard for safety or rehabilitation within the Arizona prison system perpetuates an endless cycle of incarceration, which will lead to further taxpayer expenditures to ADCRR when the people released return to prison. The Arizona legislature has failed to pass common-sense legislation to create independent, external oversight of ADCRR, and that leaves you, the Arizona taxpayer, in the dark about the use of your $1.5 billion in appropriations. We should not give this windfall to ADCRR without passing real, comprehensive, independent external oversight of this agency. You are paying for it. You should know where your money is going.